We are pleased to have Philip as a part of this blog series! In "Know the Homebrewer", we will interview one passionate homebrewer every Friday about their experiences with homebrewing. Philip talks about a brewing disaster, Kveik, IOT, females in homebrewing and more! 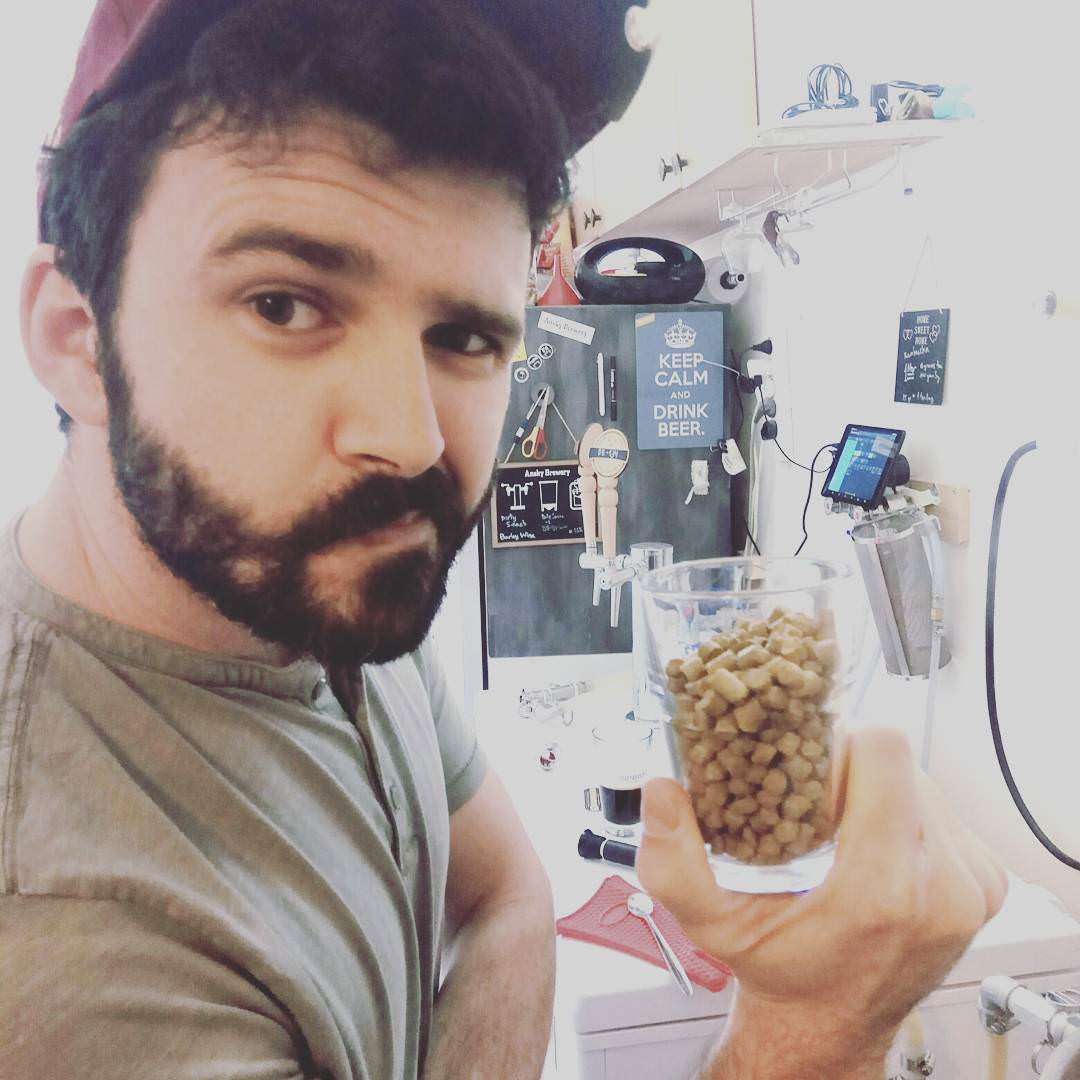 What is your day job?
I work as a designer in the research lab of IBM in Haifa Israel. I design interfaces of augmented reality tools, speech recognition tools, voice analysis tools, and IoT tools.

What or who got you into homebrewing? When was it?
I started homebrewing in 2011, I received my first homebrew kit from my friends as a wedding gift. By the way, for the wedding, we got an Ice cream kit too, the Ice cream kit is still packed, brand new never touched it :)

Can you tell us an interesting story about homebrewing?
Well, I brew almost 10 years, and of course, there are many stories to tell some of them are funny and some of them can be described as a brewing disaster.

I will tell both.

I got into electric brewing and especially IoT brewing quite by accident, I went to buy supplies for my local homebrew shop.

I started the conversation with the owner of the shop about brewing controllers. Then he asked me if I think it's possible to project the temperature readings from the controller into a remote display. I said I don't know but I will investigate it. After six hours of intensive Google search, I knew that I'm going to build, a computerised automated brewing system. Since that day at 2015, I'm into this journey of IoT brewing.

The other story is quite funny but still can be described as a brewing disaster. One day I came back from work and I was very tired but since I wasn't brewing for a long time I decided to brew anyway. I started the mash at 21:30, boil step started around midnight and decided to pour myself a refreshing pint of an Imperial Stout. I remember putting the first hops additions during the boil, The next thing I remember is waking up in the morning in my bed with a strange feeling that I haven't finished something from yesterday, After a few seconds I realised that I fell asleep during the brew day. I ran from my bedroom to the kitchen and realised that the computer finished brewing without me and left the boiling kettle to chill for the night. The disaster wasn't so bad I just boiled the wort again for 10 minutes to kill all the bacteria got into the kettle during the night. In the end, I remember it was a great beer! 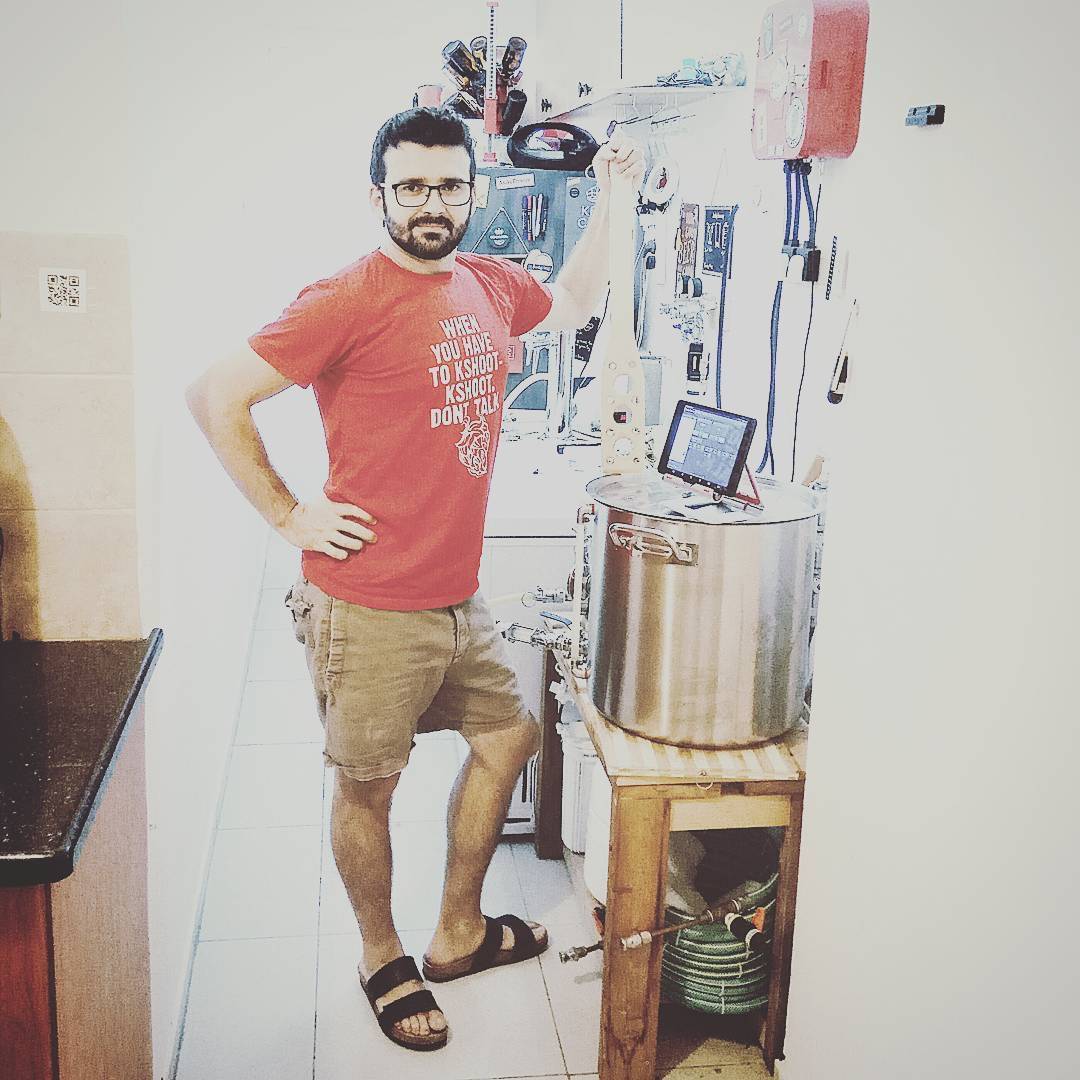 How is brewing a social thing for you? Do you like brewing with other?
Usually, a brew by myself but I'm part of a local brewing club so we have gatherings we have meetups we exchange knowledge on a regular basis. Once a year we have a brewing party tradition that's brewers from all over the country and from other brewing clubs gathering to brew in nature.

And of course, we have some collective projects barrels, That we are brewing long ageing beers such as lambics, and other mixed fermentation projects.

What advice would you like to give to other homebrewers?
Homebrewing is not commercial brewing.

Rules or practices that you find on a commercial scale brewing sometimes is not relevant to homebrew, homebrewing is much flexible and you can improvise much more.

What is the best beer you ever made? and the worst?
Like most of the homebrewers, I will say, that the best beer is the first beer.

You don't know what to expect, you are not trained to recognise flaws and other off flavours, so the first beer is the best one.

The worst beer was an experimental one, I was reading about no boiled beers when it wasn't so popular. The available knowledge on-line about the topic was limited and I decided to try my own non-boil beer on common knowledge and hoped for good results.

The result was awful it tasted like something in between cleaning solution and a rubber glove. The smell was like at the dentist clinic.

Since then I don't like no-boil beers, I smell the dentist clinic at every beer that I get to taste... 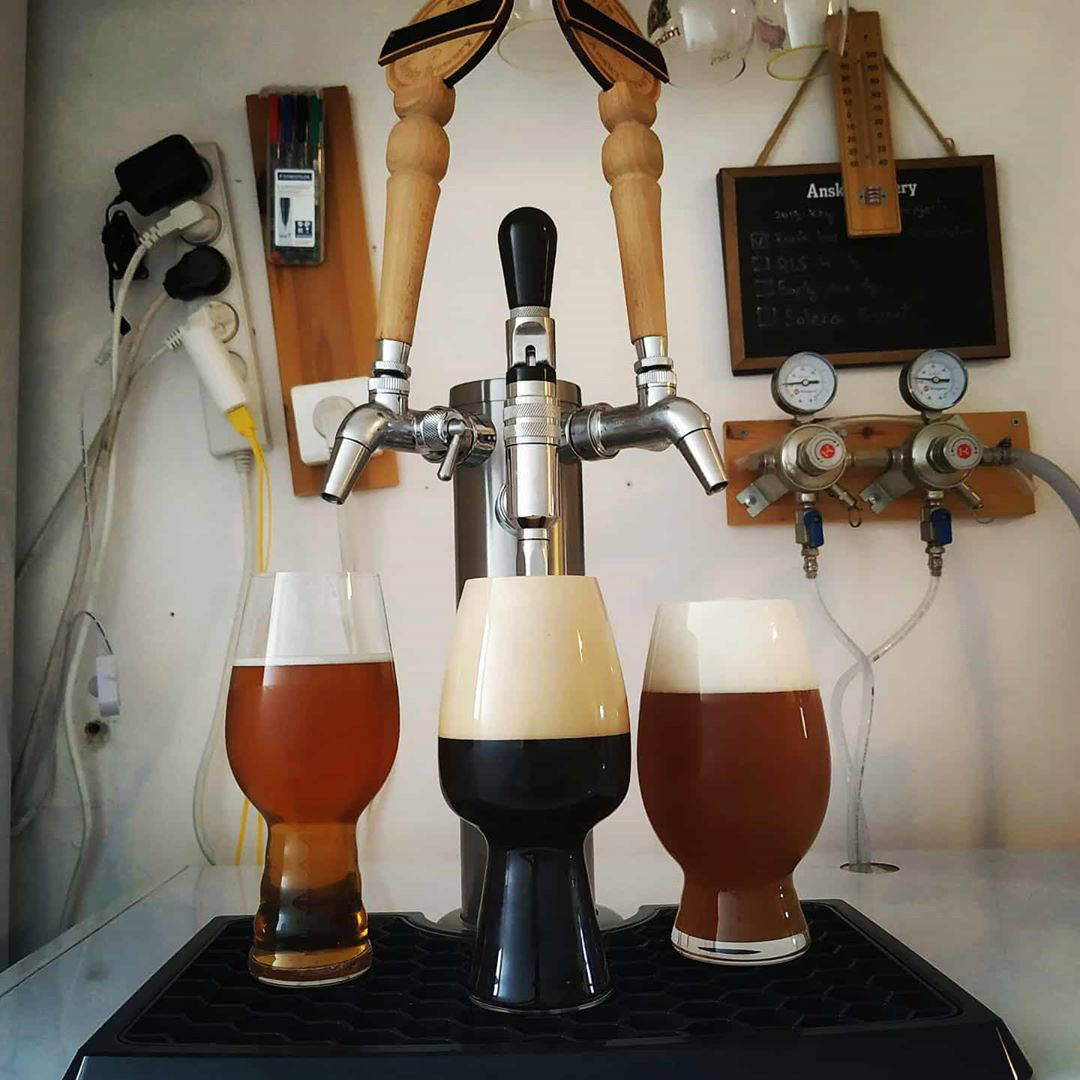 Tell us about your brewing plans for the future
Each year I start a list of interesting projects that I want to investigate in the following year in my home brewery. Probably next year will be more into mixed fermentation, more beer experiments with Kveik yeast.

What is your experience with Kveik?
I love Kveik yeast. 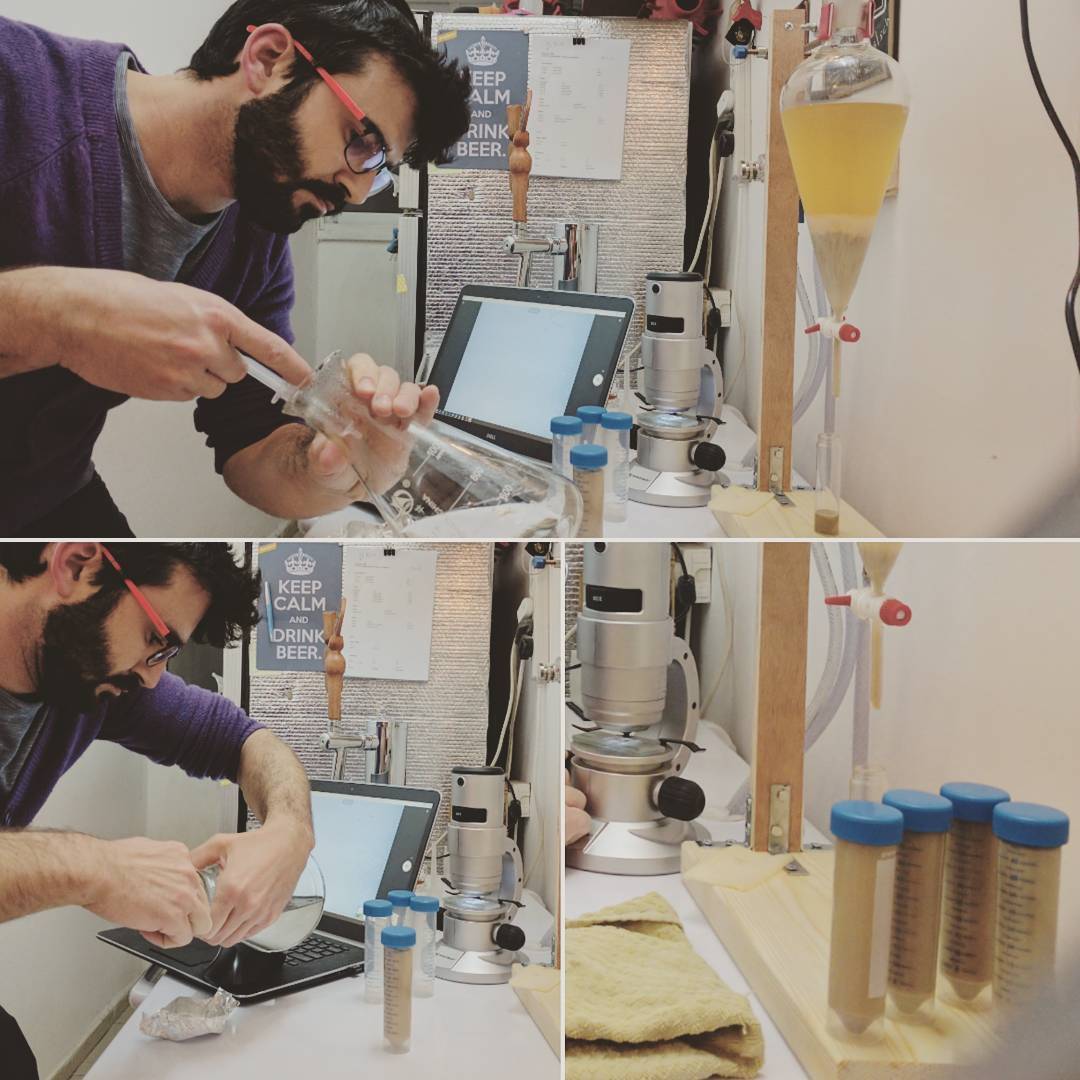 What equipment do you use and why?
I have a DIY 40 litres electric brew-in-a-basket system, controlled with a Craft beer pi controller. I have another smaller eBIAB setup for mini-batches.

I use this small size set up because it's easier to store it when I don't use it.

I have another storage room with a temperature-controlled fermentation chamber and a keezer.

How are your experiences with Plaato Airlock and Plaato Keg? What do you think of being able to share the hobby with Wifi-connected devices?

Yes, I'm familiar with the airlock and the keg device I have them both for a while now.

Plaato IoT devices in the homebrewing world are great, the information you get from Plaato airlock about processes in the home brewery, The ability detect flaws or steps in the fermentation process just by looking on the numbers and the graphs is amazing.

The Plaato keg is great and allows me to plan in advance brew days so I won't be stuck without beer.

I like the API approach it allows me to get the information about my home brewery at any other brewing software in the market or in my custom DIY digital tap list. 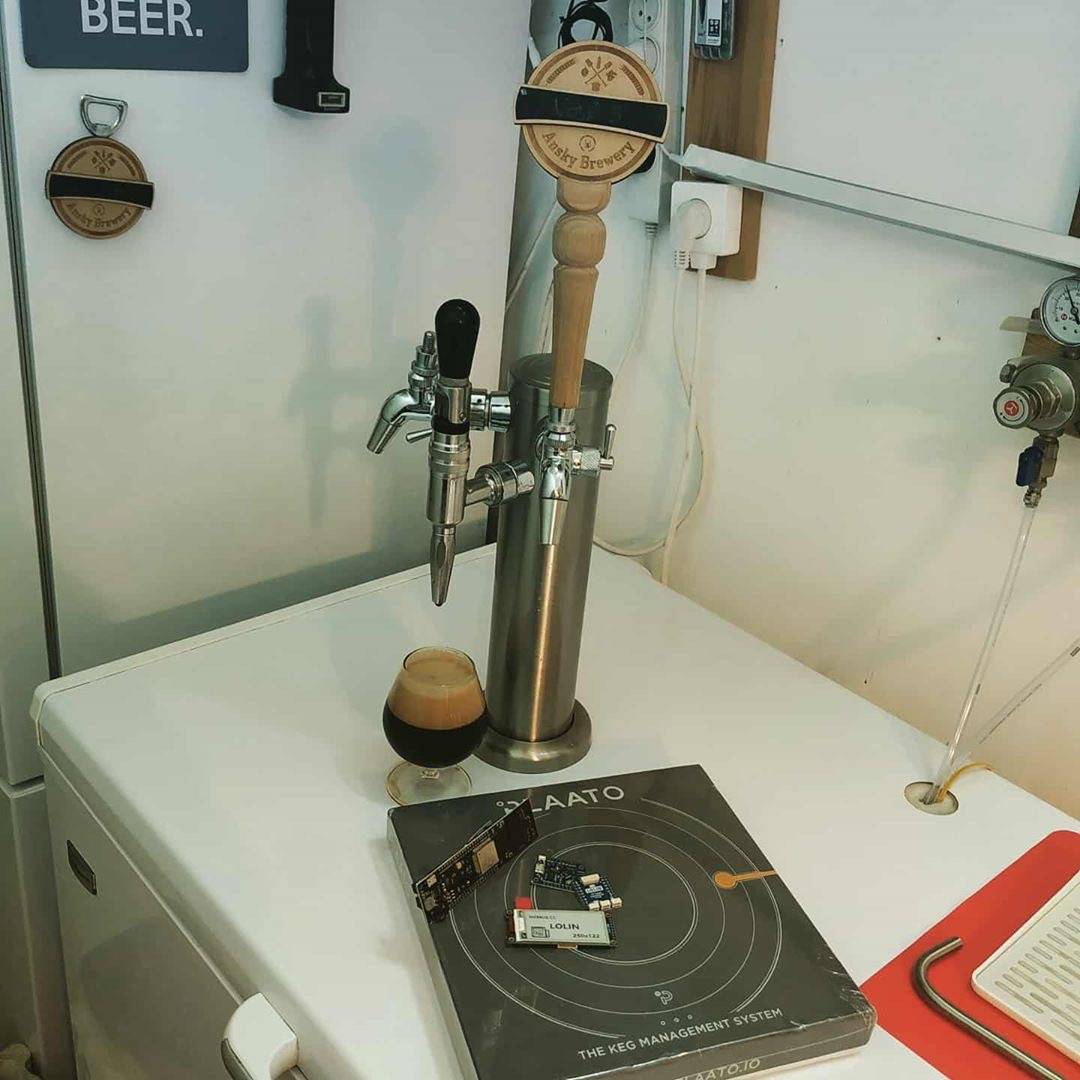 Do you have an unpopular opinion about homebrewing?
Actually I think it's really sad that most of the crowd in homebrewing are men. If you take a look at historic books you will see that women were in charge of homebrewing it was a feminine profession. As a feminist, I think this hobby should be approachable both for women and men. There is no reason why ladies won't enjoy this magnificent historical craft.

Any closing thoughts?
I think it's super cool that this hobby unites homebrewers from all over the world. I can speak with homebrewers from Brazil, Norway, the USA and China, share knowledge and get ideas it's amazing.