Ryan's based in Ohio and is involved in his local homebrew club called the Brewly.

There, he shares his passion for craft beer and takes part in competitions like Beer Cocktails.

We can tell he has an enthusiasm for custom labels and flavoured beer recipes. From Strawberry Milkshake IPA to Cucumber Peppercorn Saison, he got them all cover!

I have been working in the Information Technology field for the last 14 years and currently work in a Team Lead role for a local Software company.

Being in IT has allowed me to develop my technical skillset further and troubleshoot problems daily with a diagnostic approach. I think in some ways this has helped in homebrewing since you do need to do some troubleshooting every so often.

I have been lucky enough to travel to some pretty cool places such as Sydney, Australia and Berlin, Germany, which has allowed me also to check out their beer scenes.

What or who got you into homebrewing? When was it?

I have always had a passion for craft beer and trying to visit as many breweries as possible in any place I would visit. Back in March 2017, I had bought the Northern Brewer Homebrewing essentials starter kit which included a recipe for a Block Party Amber ale. I brewed my first batch of beer which was very similar to a New Belgium Fat Tire, and I was immediately hooked.

A few months later, I then bought another three extract kits from Northern Brewer and was able to experiment with several other styles.

About a year later, I switched to a Brew in a Bag system which allowed for better control over the ingredients I was using. I do have to thank my wonderful wife, Anna, for putting up with this time consuming and pricey hobby and being my research assistant for coming up with new styles and beer names.

Can you tell us an interesting story about homebrewing?

For anyone who first gets into homebrewing, it is uncharted territory. You can either do a ton of research along the way or just wing it. I chose the route of continuing to research and plan before I attempt a recipe. The scale I brew at is not nearly as expensive as what a microbrewery would brew at, but I still want to avoid having to dump a batch of bad beer if I don’t have to. I remember the first beer I brewed; I was constantly looking at the fermentation and checking gravity which ends up wasting good beer since you have to pull a sample each time to check the gravity.

This is where I believe PLAATO Airlock would come in handy. Now that I am about 30 some recipes in, I feel like I have seen and experienced a lot over the past 3 years of homebrewing. There are still things that can stump you and make you continuously research until you find the answer you are looking for. Recently I had a beer that had a weird thick haze to it while in the fermenter but tasted fine. This was my first Saison so I wasn’t sure if that was normal for the yeast I used. After researching and asking some fellow homebrewers, rest assured the beer was fine and it was well enjoyed while consumed.

How is brewing a social thing for you? Do you like brewing with others?

Over the last year, I got involved in a local homebrew club called the Brewly, which offered the opportunity to gather with several other people that had the same passion for homebrewing as I do. We would meet at either a local brewery or the local homebrew shop “Cleveland Brew shop” once a month, discuss homebrewing techniques, share stories and most importantly share our own created brews. I have been able to do a collab with another club member and then also have taught several friends and relatives about the brewing process. The community around homebrewing is so big, that there are many ways to get feedback and help on learning new techniques. I do a majority of my brewing myself since it allows me to dial in my recipes, but I am always open to collaborating on a brew.

Our homebrew club has done in-club competitions such as Beer Cocktails as well as brewery bar crawls and it’s just nice to meet with a group who also has such a passion around craft beer. We’ve even gotten to brew together at production breweries. A few of us were lucky enough to go to Little Fish Brewing Company in Athens, OH to brew one of our member’s beers that took best of show in a local competition.

- Ryan and his brewing space - A restored Jockey box from the 50s! - a final result: Blackberry seclusion :)

What advice would you like to give to other homebrewers?

If your first batch doesn’t come out exactly as you want, don’t give up! Homebrewing requires a lot of patience as well as experimenting. Also, know that a majority of the brewing process involves cleaning, so you need to be very open to washing and sanitizing equipment repeatedly.

What is the best beer you ever made? And the worst?

The best would be a beer called “Summer is Coming” which was an Orange Milkshake IPA. This beer was very complex and came out exactly as I was hoping. I used fresh orange peel, honey, vanilla bean and then the hops to achieve the citrus notes where Mosaic, Mandarina Bavaria, and Centennial. I ended up taking 1st place in a local competition for Specialty IPA and got a Gold medal. This one went fast, so definitely looking to brew it again this summer.
The worst was a Strawberry Jalapeno Rye IPA, and at first, it tasted pretty decent. I believe I overdid the number of fresh jalapenos I used since they took over and I lost the strawberry flavours.

Tell us about your favorite styles to brew.

I enjoy brewing with different adjuncts, such as fruit. I know a lot of people are into brewing IPA’s, but at a certain point, I want to do something different than just hoppy. I’ve brewed a Chocolate Covered Cherry Belgian Strong around Christmas and overall was very happy with how it turned out. I also brewed a Chocolate Raspberry Stout. With each of these recipes, I was able to focus on getting the flavor to come through for both the chocolate and fruit but for them to not become overpowering. Lately, I have gotten more into brewing Saison’s and Kettle Sour’s, which offers a whole new set of opportunities to experiment.

Tell us about your brewing plans for the future:

As any aspiring homebrewer, the end goal would be to have my own brewery where I could share the passion of beer and my unique recipes.

That is definitely more long term, but right now, I just want to keep growing my knowledge and improving my efficiencies. I have a pretty good setup of brewing equipment now, but definitely have some wish list items for the future.

What is your experience with Kveik?

I used Omega Labs Voss Kveik yeast to brew a Summer wheat for my bachelor party this past year. For hops I used Cluster, Cashmere and Cascade and the beer definitely took on a nice citrus flavour. Overall fermentation went smoothly and attenuated well.

What equipment do you use and why?

I currently use an All-grain setup which includes a cooler mash tun, MegaPot 1.2 8-gallon hot liquor tank and a MegaPot 1.2 10-gallon boil kettle. I have been a stovetop brewer but recently switched to a Bayou Classic banjo burner which has been a huge time saver.I would tell anyone to first start out on a stovetop and then as you grow into the hobby and start making bigger batches move to a propane cooker.
My fermenters are 6-gallon Big Mouth Bubblers and then a 7-gallon SS Brewtech Brew Bucket. The Big Mouth Bubblers are nice since you can watch the fermentation as it happens, which is a very cool process. I then use the Brew Bucket for secondary fermentation since the conical helps contain sediment.
I bottle as well as keg my beer and lately have been trying to dial in the Blichmann Beer Gun.
Most recently, I have started using an in-line filter for transfers which helps provide a much clearer beer. 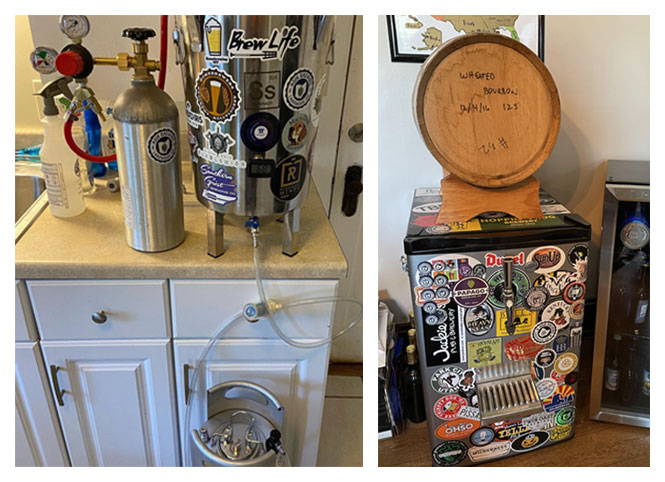 - Some of Ryan's brewing equipment

Are you satisfied with that or are you thinking about upgrading?

I am pretty satisfied where I currently am at equipment-wise. There are definitely pieces of equipment I would like to add to my arsenal, but that all comes with time.

As I continue to scale up, I will look to add more items for making the hobby more efficient and the quality of the beer even better. The neat thing with homebrewing is that it is definitely a Do It Yourself hobby. Meaning you can pretty much build out anything you want to help with the homebrewing process. But sometimes you do just want to go the route of getting the more critical items through a reputable company with good product reviews.

Recently I got a 5 gallon bourbon barrel, so I will be experimenting with some barrel aged brews.

How are your experiences with PLAATO Airlock and PLAATO Keg?
What do you think of being able to share the hobby with wifi-connected devices?

I have not been able to use any of these products yet, but they are something I want to try out in the future. I would love the ability to be able to monitor my fermentation via my mobile device and see how much my temperatures change throughout.

- A touch of personality with custom labels

Do you have an unpopular opinion about homebrewing?

I have a pet peeve for putting my beer in an unlabeled or labelled bottle with one of my own crafted labels. I think this helps give your beer more of a professional look and shows the time you put into brewing that beer. It also gives you some creative abilities to design cool labels. The time spent on cleaning and reusing bottles is well worth it if you plan to brew on a regular basis.

I would recommend getting into homebrewing. It gives you the ability to replicate some of your favorite beers but also try creating something new and different. There are no set rules in brewing, just the foundations of making beer. This can also lead to making other styles such as Ciders, Meads and Wine. It is really enjoyable to have one of your owned brewed beers on tap and appreciate all the time that went into it. Again, Patience is key, so before jumping into this hobby, know that making a beer can take up to at least a month before you can enjoy it. Cheers!
Thanks!